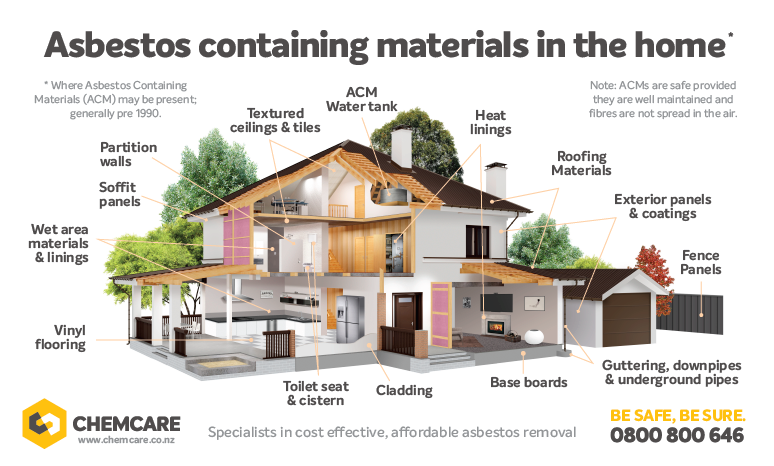 There is a lot of discussion around asbestos, particularly in recent years where Health & Safety has been pushed to the forefront of our minds – but what actually IS asbestos and why do we, as property managers and landlords, need to know about it?

All landlords and property managers must abide by the Health and Safety at Work Act 1974, hence they must be aware of anything that may impact the general health and safety of their tenants.

Asbestos was known as the “Magic Mineral” for many years given its versatility and properties as a construction product. It was used in many ways such as insulation, fire proofing, cladding, even roofing and floor tiles. It wasn’t until much later that the effects of asbestos on those who produced, shipped and used it became apparent. Unfortunately by this point, asbestos was so widely distributed and used that it was impossible to trace it and remove it from those buildings that had included it.

So WHY is Asbestos dangerous?

Asbestos is made of fibres, as you will see below. When the Asbestos is “friable”, meaning the edges are damaged or worn, these fibres can be released into the air, and inhaled or ingested. Once ingested or inhaled, they are difficult (if not impossible) to remove, and eventually cause disease, such as lung cancer or conditions known as Asbestosis and Mesothelioma.

To keep things simple, there were three main types of Asbestos in use in this country – these are nicknamed after their appearance: “White Asbestos” (Chrysotile), “Blue Asbestos” (Crocidolite) and “Brown Asbestos” (Amosite).

The use of Blue and Brown Asbestos was banned in the UK in 1985 but large amounts remain. Blue is widely seen as the most dangerous type of asbestos due to its structure – the fibres are short and spiky, which cause the maximum damage to the lungs.
Blue asbestos was often used for products such as spray on pipe lagging, insulation or asbestos cement.

Just as a matter of interest, a lot of people think that the visible fibres of asbestos are what cause the problem. In fact, it is actually the fibres you can’t see with the naked eye that are more troublesome, as shown by this micrograph:

The most common type of asbestos, white, was banned in 1999 which means as a landlord or property manager you should be aware that it may be present in most properties built or converted before 2000. White asbestos is commonly found in areas like artex ceilings, insulation, cement, soffits, piping, fireproofing and ceilings but is so widespread the uses of this type of asbestos would take too long to thoroughly list.

How can I tell it is asbestos?

What do I do if I have asbestos?

The first step in the sucessful management of asbestos is the identification of the location and type of asbestos, and the assessment of the current condition.
We would always recommend using a professional company to carry out an “Asbestos Management Survey” and if necessary, an “Asbestos Management Plan and Asbestos Register”.
This survey will review the property non-invasively to identify the location of asbestos on site, as well as giving recommendations for its management and/or removal.
Should there be extensive works being carried out at the property, it is important to take this further and arrange for a “Refurbishment/Demolition Survey” which is much more invasive.

Both types of survey will provide information on how to manage the asbestos, which is likely to be either complete removal, encapsulation (covering to prevent the release of fibres) or regular checking of the condition.

If you would like further information, the Health and Safety Executive website is a fantastic resource, in particular the booklet titled “Asbestos Essentials“.